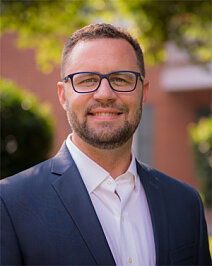 Dr. James "Jamie" K. Dew was elected New Orleans Baptist Theological Seminary's ninth president on June 5, 2019, by a unanimous vote of the NOBTS board of trustees In accepting the position, Dew said, "I'm humbled to the core of my being. I'm going to give you everything I have. I believe we're going to have a fantastic time as we go forward together." Dew's academic credentials include two Doctor of Philosophy (Ph.D.) degrees-a Doctor of Philosophy in Theological Studies from Southeastern Baptist Theological Seminary (SEBTS) and a Doctor of Philosophy in Philosophy from the University of Birmingham, Birmingham, UK. Dew's Master of Divinity in Pastoral Ministry is from SEBTS and his Bachelor of Science in Biblical Studies is from Toccoa Falls College, Toccoa, Ga.

Dew's publications include Philosophy: A Christian Introduction, with Paul M. Gould (Baker, 2019); Understanding Postmodernism: a Christian Perspective, with Stewart E. Kelly (IVP Academic, 2017), God and the Problem of Evil: Five Views, with Chad Meister (IVP Academic, 2017), How Do We Know? An Introduction to Epistemology, with Mark W. Foreman (IVP Academic, 2014), God and Evil: The Case for God in a World filled with Pain, with Chad Meister (IVP Books, 2013), and Science and Theology: An Assessment of Alister McGrath's Critical Realist Perspective (Wipf & Stock, 2014).

Prior to his coming to NOBTS, Dew served as Vice President of Undergraduate Studies and Distance Learning and Associate Professor of Philosophy and the History of Ideas, Southeastern Baptist Theological Seminary.

Dew served as senior pastor of Stony Hill Baptist Church, Wake Forest, NC, for eight years and in a variety of church ministry positions including minister to adults, youth minister, and interim pastor.

Dew and his wife Tara are the parents of two sets of twins - Natalie and Nathan, Samantha and Samuel. Tara Dew holds a Doctor of Education (Ed.D.) degree from SEBTS that is focused on the preparedness of pastors' wives. 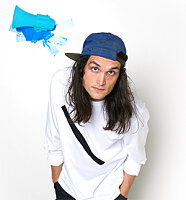 Sean Curran is a vital part of Passion and sixstepsrecords/Capitol Christian Music Group as a worship leader and songwriter. His first solo EP, Bigger Than I Thought, released in June of 2019. Since 2017, Curran has been part of leading worship at Passion Conference and is featured on Passion albums, including: Follow You Anywhere, Whole Heart, and Worthy of Your Name. He is a writer on songs such as "Bigger than I Thought," "Whole Heart." "Glorious Day, and "Step Into the Light"- a song that arrested the attention of over 40,000 college students with much anticipation and conversation after it debuted live at Passion 2019. Curran composes in such a way that his songs exist as invitations to enter into a conversation with a loving Father. A former member of Billboard chart-ranking band Bellarive, Curran's eclectic style of worship helps to usher others toward the journey God desires for them. Curran lives in Atlanta, Georgia with his wife Natalia. The two call Passion City Church home.

<< Back to the DNow Home page